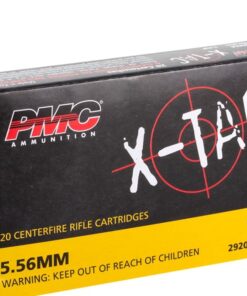 xm855 green tip ammo made to NATO’s M855 standard. Each 62-grain bullet has a steel core penetrator and a full metal jacket for higher penetration. It has a strong reputation among shooters for its accuracy, cleanliness, and consistency.

These rounds come bulk packed in 20-round boxes. The rounds are Boxer-primed with reloadable brass cases. Muzzle velocity clocks in around 2,920 fps, with a muzzle energy of 1,174 foot-pounds.

Note: This is steel-core ammunition and should not be used on steel targets. It is also 5.56 NATO ammo, so shooters with firearms chambered in .223 Remington should ensure that their weapon is designed to fire higher-pressure 5.56×45 ammo before attempting to use these rounds.

PMC X-TAC ammo is made by the Poongsan Corporation, a manufacturer of ammo for the South Korean military. A longtime producer of NATO-spec ammunition, Poongsan possesses decades of experience in manufacturing ammo. The company makes its own ammo components in order to have maximum quality control throughout the production process. Any ammunition that fails tight tolerances for powder loads is rejected, ensuring that only good rounds reach the end-user.

There are no reviews yet. 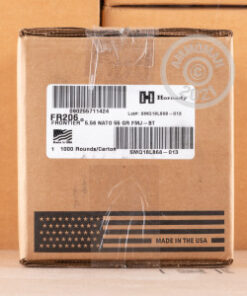